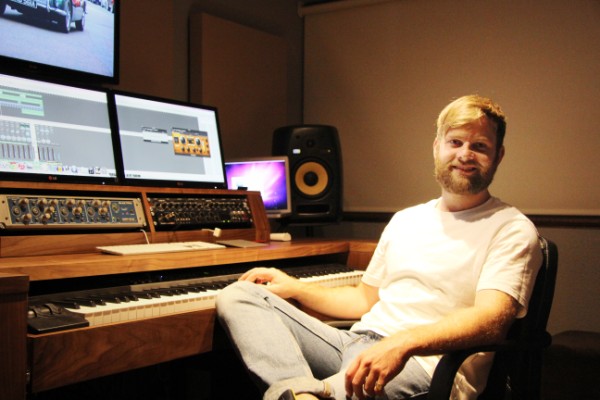 Since arriving in Cape Town 4 years ago composer extraordinaire Josh Wynter has fast developed a reputation as something of a musical powerhouse.
With the release of his 3rd album in the hugely popular Homelands & Heroes series we thought it high time that we get the lowdown on what he’s all about…

When did you first get into music?

Well, I have a mixture of really traditional film music (classical) training coupled with a 1960s Pop star Dad, so it happened pretty early on. Like a lot of film & tv music guys, I had the whole cathedral choir experience, starting around age 7 followed by a music scholarship at a big boarding school and then some more formal training with a classical music degree at a well-known University, topped off with a Masters in scoring for film.

Wow, that’s a lot of training!

It is, but along the way I pursued the non-classical stuff relentlessly; learning the drums and guitar, playing in a lot of dubiously titled rock bands, wearing baggy and then ripped jeans as the current fashion got more and more ridiculous. I then really got into electronic music at University and ultimately discovered that Film and TV is the one magical place where all these different genres and disciplines can come together and exist side by side in a completely genre-less medium. Even if you don’t need the classical chops explicitly for a given project because the director is really into dubstep right now, having that deeper understanding of how music works from the classical training is never going to be a bad thing; any project usually ends up as a bit of a hybrid of different elements and influences anyway so having a broad interest and expertise in myriad musical genres is key.

So, what instruments can you play?

I am currently lucky enough to write music every day and make a living from it. It wasn’t always this way and I’m really aware of how lucky I am to be able to say that – right now – I am a professional composer for tv and film.

What are some of the challenges you face as a composer / producer here in SA?

Budgets. There’s a lot of content made here, but in my experience there is also a limited demand for high quality original scores. Cue Mama Dance ! high quality production music! It’s obviously the way forward for a lot of people right now.

Tell us a bit about your albums on the Mama Dance ! Music Library?

I have been working on a series of albums called ‘Homelands & Heroes’ for about 2 years now, and am just finishing the fourth release. I did a lot of musicology at University and it was actually my love of South African music that brought me here; I did my final thesis on South African popular music and had to come see this amazing place that I’d been researching from afar for so long.

When it came to planning the Mama Dance ! albums, I definitely wanted to do something with a hint of Africa but also something that was just high end-sounding production music. The first album, ‘Homelands & Heroes: Epic Orchestral‘ was focused on that big filmic sound that I really love, and I was lucky enough to persuade the amazing Congolese singer Mapumba to bring his vocals to the party, which really took things to the next level. The Homelands & Heroes album series has now totally branched out and diversified to include electronic/dance music albums and allowed me to really indulge in my passion for modern styles so I’ve completed an ‘Electro-chestral‘ album and have just finished a brand new album of elegant, gentle, and spacious material. I think overall, I’ve just aimed for that high-end glossy feel for the Homelands and Heroes brand, whatever the genre, so it’s basically quite a versatile collection of albums that would suit loads of different contexts requiring that expensive, sophisticated sound.

Did you come to SA to make money to send back to your family in the UK with the exchange rate the way it is?

Yes. They have now relocated to a small caravan in rural Devon, which they share with 5 other families. They are very happy.

What does the future hold for Josh Wynter?

I’m working on a bunch of exciting projects at the moment, both here in SA and for the UK, so the immediate future is looking good. Some of the main players behind Top Gear got together a fantastic new show called The Classic Car Show, presented by supermodel Jodie Kidd and original Top Gear Presenter Quentin Willson, and I got to do a swinging 60s style theme tune for that, using some great South African brass players Nick Green and Michael Magner. It was really good fun and it’s going to be on all over the world, which is cool. I’m doing an amazing Sci Fi series for the UK at the moment and I just finished two brand new cooking show scores for for Mother City Records: Neill Anthony Private Chef (SABC3) & Jenny and Reza’s Fabulous Food Academy (Global Food Network). Lots of diversity, loads of different styles and hopefully all of them will do really well. I’m also really lucky to be able to contribute regularly to Mama Dance! these days so I foresee a lot of awesome new production music happening over the next few years!

Rumour has it that you had the biggest beard in music at one stage, do you feel that now that it has gone, like Samson, you might have lost some of your musical strength?

The loss of the beard definitely took its toll on my emotions and abilities at first, but I took heart at the subsequent beard growth boom over at the Mama Dance! offices and realised that it’s OK to inspire people. I’m now back to my happy, bearded self, musical skills intact.