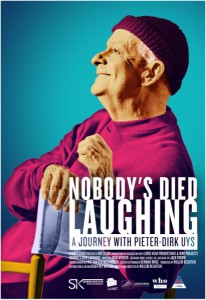 The film is a theatrical-action-documentary telling the life story of South African performing artist and activist Pieter-Dirk Uys and features the likes of Charlize Theron, Sophia Loren, David Kramer, Jack Parow, Zolani Mahola (Freshly Ground) and Dame Janet Suzman.
It opens nationwide this Friday 29th July at Nu Metro and Ster Kinekor cinema’s so get out there and check it out!