GLOBAL GRIOT: Bridging cultures through the evolution of an ancient African tradition 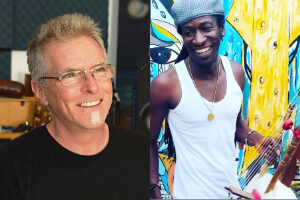 Nic Paton and Jally Kebba Susso combine their individual expertise to create the story of the Global Griot – a fusion of electro-classic Mandika music. By blending the spirit of tradition with the fusion of world music, they tell a story of how cultures can harmonise together through music and song.

In Western Africa, griots or jalis are historians, musicians, singers, poets and storytellers from Mandé society. They preserve the memories of the collective heritage, culture and lineage of families and clans through song and story. An inherited tradition, griots are considered as living archives of traditions that are passed down through generations of people who are deeply connected to spiritual, social and political wisdom.

Modern-day griots cross not only generations, but also ancestral borders, and emerge as part of a global band of artists who fuse cultures from around the world.

Jally Kebba Susso is a modern-day griot who comes from a long line of 74 generations of kora players, and is known as an ‘Afro-futurist musician who expands the boundaries of Gambian musical traditions by combining traditional West African sounds with hard funk, jazz and rock’. The kora is a 21-stringed instrument of African origin and belongs to the chordophone family.

Born into the tradition, Jally never doubted his path and was always excited about it. He saw schooling as a way to learn the basics of reading and writing only, knowing that once he completed his studies, a contract would be waiting for him to go abroad in order to deepen his skills in his intrinsic craft.

Jally’s upbringing was somewhat unconventional in Gambia as his family exposed him to world cultures, and he was influenced to an array of genres such as hip hop, salsa, and jazz at an early age. When he arrived in England as a teenager, his experience included opportunities ranging from the Royal Philharmonic Orchestra to funk, rock and jazz bands – inevitably expanding into further fusions from there. He has collaborated with more musical styles than any other kora player in the world as of now.

Nic Paton is a South African world music composer with an extensive portfolio of collaborations with artists from around the world. He has delivered over 30 albums and composes for media, film, documentaries, music videos and TV commercials.

He picked up his first instrument when he was 9-years-old, and by the age of 14, he chose the guitar and saxophone as his two primary instruments to master. He completed a degree in jazz music and pursued this career until age 33 when he decided to venture into Information Technology.

With his heart always connected to music, at age 50 he decided to give music another chance, and delved successfully into production music. Armed with a newfound business mindset and an understanding of financial systems, he combined these skills with his background in sound engineering and re-entered the business of music with a grounding that he didn’t have in his 20s when he worked as a jazz musician.

MD: How did the two of you come to work together?

NP: Our mutual friend, Janet Adams, put together an online festival called the AI Kora Festival. It brought AI enthusiasts together with the kora, and while this might seem like a strange combination, it really worked. Jally and I did a song together and it was obvious that we needed to produce something.

MD: What was the inspiration behind the album?

JKS: I live for collaborations and have my hands in everything that is music – from all different genres like hip hop, electronic, funk, and jazz to name a few.

It is crucial to keep the heart and soul of my forefathers, but I want to expand the boundaries to create my own mark, and so this was another opportunity to do that.

NP: I have never created an album with an African virtuoso, and while South Africa has amazing vocalists and jazz musicians, the opportunity to capture, arrange and produce an album with its roots deep in African tradition was an amazing opportunity in my career.

MD: What was different about this project compared to others you’ve worked on and what were some of the challenges faced?

JKS: Creating music for production use is new territory for me since I come from a commercial background. I speak the language of music easily, so creating material is not a problem, but I’m not used to the business side of things, so this was a testing ground.

This was also the first time I had collaborated with someone with whom I hadn’t physically met, but the journey was mostly effortless and smooth.

NP: I’ve done enough to know what the technical pitfalls are when producing online, so I could easily overcome these challenges.

I’ve also come to learn how to slot into place within the traditional African aesthetic. It is very much a process of learning by osmosis versus explanation. The western mind breaks things down into constituent parts and analyses them. But the African way is more of an embodied, felt experience.

There’s a meeting point of empathy and resonance, and once that is understood, a musical connection is made.

MD: What does the album evoke in you?

NP: It’s extremely rewarding to know that I’ve journeyed with a master and worked alongside to nurture the resonance between us – combining both of our strengths into a co-creation. We were able to let go and consistently find a meeting point, knowing that the rewards of collaborating at this level was much greater than any discord we might have experienced.

JKS: I feel like the album is a good balance of our talents. It calls out different moods and sounds that is the magic of blending genres.

It is also the birth of a new direction for me. Despite everything I’ve done until now, I feel like I am in the beginning of my career with this new knowledge about the business of music. When COVID hit, it changed my way of thinking. If you can’t play live, you can’t get paid, so it shifted my outlook on the journey of music.

I still enjoy live performances and if you take that away from me, you take my soul away. I will not only be a studio artist because I understand how much joy I bring with live shows. As a 74th generation of kora players from father to son, music is not only a business to me – it is about selling and preserving.

Production music expands my repertoire. I didn’t know this before and I didn’t have that mindset until I met Nic who composes for Mama Dance.

MD: Nic – How does your personal and spiritual worldview connect with your musical journey?

NP: As a member of interfaith communities, I spend a lot of time in other people’s worldviews. Interfaith philosophy brings together people of different religious or non-religious groups and creates a space that welcomes different dialogues. It supports an understanding and coming together of cultures and dynamics toward an underlying goodness that exists within each person, something that is very similar within the world of music.

Religion and music are both belonging systems with similar dynamics – how to co-exist with someone who is different to you, how to deal with conflict, and how to learn the art of being able to ask questions – they are in constant conversation. The two go hand-in-hand and I’ve learned lessons that crossover from both.

World music is a partnership of technical and musical excellence – the genre itself involves cultures combining different levels of expertise into a co-creation.

MD: Jally – How are your collaborations received within the context of a longstanding tradition and what made you choose a path of fusing genres?

JKS: In keeping traditions alive, there will always be scrutiny from people who are afraid of change. An example of this was when we changed from leather straps to metal tuning pegs. For those of us who live in Europe and need to tune during live performances, unless we want to spend half of the concert tuning and regulating sound, making this shift was absolutely necessary.

What I bring is unlike what any other kora player has brought before, and unless there is an evolution of this tradition, I am just narrating the same story as others before me. But the story is changing, and I need to bring in my factor, my way of thinking and leave my mark in order to flip the story so that the kids of tomorrow will want to continue its legacy. They can use my style as a reference to do something else. If something doesn’t evolve, it will die out.

MD: What would you like this album to inspire in others?

NP: It is a deep conversation between cultures, classes, musical styles, and histories, and is much more than simply a utilitarian product. There is a soulful resonance between us and despite our differences like distance, traditions, and backgrounds; we found commonality. That spirit will come through and empower anyone who uses it.

JKS: My storyboard includes many different storylines, but they are all interconnected. The freedom to travel and be exposed to world cultures gave me the knowledge and understanding of how different genres are all intertwined and feed each other. Within traditional music exists various genres, and before they were separated into genres, it was all just music.

At the end of the day, I am a musician – and music contains everything, it is not restricted.

JKS: Follow your heart, but be ready to compromise. If you don’t have the opportunity to be seen, your greatness will never be appreciated. This can be a difficult industry and so one needs to make compromises initially in order to build trust. Once you get there, people won’t ask you to compromise anymore, and you will be appreciated for your unique expression.