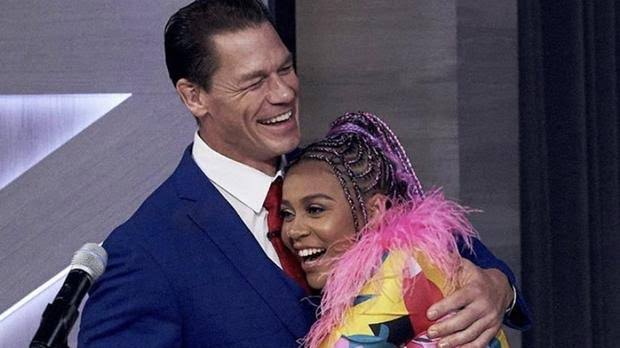 I was in Los Angeles at the end of last year for a music conference and realised that Africa still has some way to go in becoming main stream in music consumers’ minds instead of just the go to for humanitarian videos, but again thankfully there are more and more talented people on this continent that are getting the exposure they rightfully deserve.  Here are a few examples:

John Cena appeared on The Ellen Show to talk about a viral dance challenge that had started to a track called.., “John Cena” : https://www.youtube.com/watch?v=r1-lep_y33w.  The track is in a unique South African genre called Gqom (Zulu for “drum”).  Sho Majozi herself is rather unique for fusing Gqom music with her South African mother-tongue of Tsonga and her East African adopted language of Swahili. She was recently on the Kelly Clarkson show and the man himself showed up: https://www.youtube.com/watch?v=ElRhKFvQWGA.  Gqom music has found its way to other internationally famous ears with the likes of Major Lazer and Swiss Beats being fans.

Thanks to big Hollywood films from Black Panther in 2018 to the updated Lion King this year, African artists like Tiwa Savage, Burna Boy, Mr Eazi, Babes Wodumo etc, are getting more and more airplay which in turn is acclimatising foreign ears to African rhythms and melodies.  Our music has even found its way into the reality TV market with The Ndlovu Youth Choir making it to the finals of America’s Got Talent with their distinctively South African style of singing: https://www.youtube.com/watch?time_continue=429&v=NqsFO4atwJo.  Simon says at the end of their audition that “we’ve always been waiting for a choir like this.  Something we’ve never heard before…”.  The hope is that one day people will sigh “here we go again” when another South African choir comes out in the same way they do when someone whips out a ukulele on stage.

Then we also have Africans in well placed media positions that are helping to spread the message.  Check out Trevor Noah chatting to Black Coffee https://www.youtube.com/watch?v=Fa6DweKPf1A  and Burna Boy https://www.youtube.com/watch?v=P9yLNFhmdPc.  Both of whom, like Mama Dance, are passionate about African music genres finding their way into ears of all colours, shapes and sizes around the world.

So hopefully in the not too distant future, when celebs get together to save the planet they sing a pop song with marimbas and djembes https://www.youtube.com/watch?v=S2SMvfGe72U

Or dance African dances at the Grammys:

And hopefully one day soon it will be the Africans doing most of the singing and the dancing.